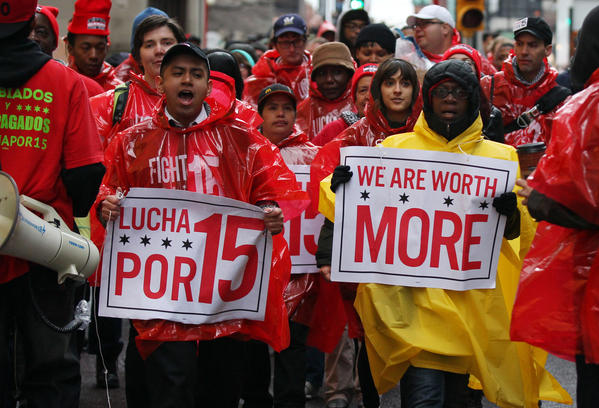 As socialists, we believe working class people are the key to building a better society. All of our organizing is devoted to building a strong, inclusive, united workers movement that can take on the bosses both in workplaces and in society more broadly. We take seriously the old slogan that “an injury to one, is an injury to all” — both because it is morally right and because it is the only way for workers as a class to advance their interests. When workers are divided against each other, the biggest beneficiary is the 1%.

We are strong supporters of efforts to organize retail and service workers to fight for union rights and for a $15 minimum wage. Whenever any workers in our area go on strike — whether its teachers in the CTU, McDonalds workers, or oil refinery workers in Whiting — we do all we can to show support and solidarity. We are strong supporters of the idea that workers should have their own political party, separate from the corporate-controlled Democrats and Republicans.

As Marxists, we recognize that all workers produce more value while they’re at work than they get paid in wages. Indeed, that is where the boss’s profits comes from — hence, the lower our wages and the faster the pace of work, the more money they make off us.

But even though US workers today are doing more and more work for less and less pay, the ruling class is making record-breaking profits. Even as wages continue to drop and employers demand cuts to benefits and retirement, the bosses are making money hand over fist.

We believe that the only way to turn this around is to build organization and power among workers in their workplaces. Thus, our members are committed to building a militant, democratic, rank-and-file-led labor movement. We believe that we’re strongest when we organize the unorganized and break down barriers created by the bosses to divide and conquer the labor movement. We also believe that the labor movement should fight for basic class-based political demands — e.g. no to cutbacks, yes to taxing the rich — by seeking independence from the corporate-controlled Democratic Party.