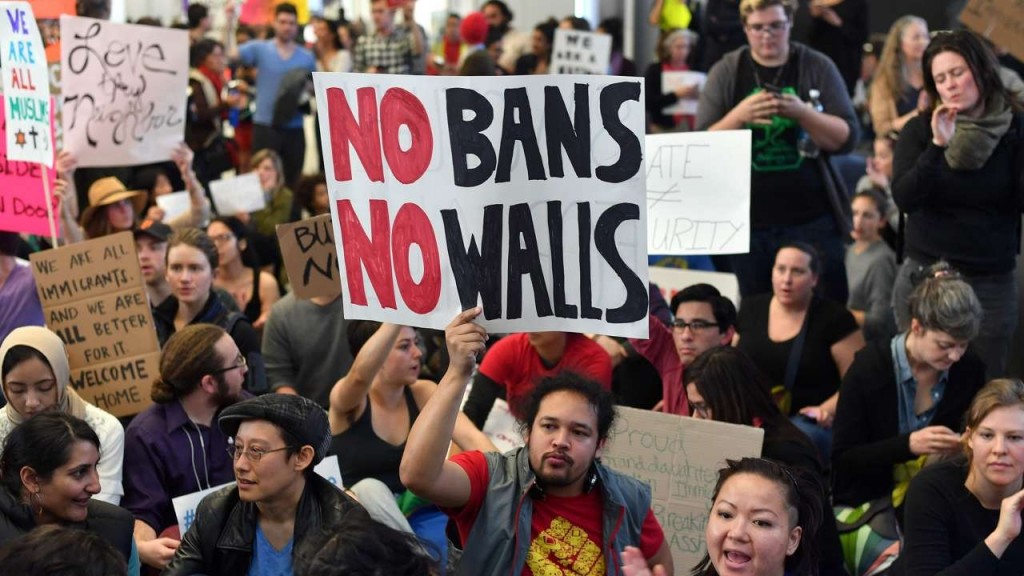 THE MASK has been ripped off the supposedly new “alt-right” movement to reveal the familiar and horrifying face of fascism that most people thought was a relic of history.

Last weekend’s “Unite the Right” rally in Charlottesville, Virginia, wasn’t about some fake defense of “free speech,” but championing a Confederate statue. It welcomed open Nazis into its ranks, who roamed the streets looking for people to assault–and ultimately committed a vehicle-terror attack against a crowd of peaceful protesters, killing 32-year-old local activist Heather Heyer and injuring several dozen others, many seriously.

The outraged response to Nazi terror in Charlottesville was immediate and powerful, with protests and vigils in hundreds of cities and denunciations of the violent racists coming from everywhere. Everywhere but Donald Trump’s White House, that is.

This is a decisive moment. “Will the overt displays of racism return the extreme right-wing to the margins of politics, or will they serve to normalize the movement, allowing it to weave itself deeper into the national conversation?” asked the New York Times.

The answer depends on what the millions of people who despise Donald Trump and want to stand against him and the right do in the coming weeks and months.

Now is the time to overcome the fear that the fascists want us to feel and organize demonstrations with overwhelming numbers–to stop this cancer now, before it can grow into something far more threatening. That means organizing broad protests open to everyone affected by this threat–which is just about everyone–to prove the far right is a tiny minority.

After the sickening violence of the storm troopers in Charlottesville, we know that the far right isn’t looking to gain power through winning votes, and they don’t care about approval ratings. We can’t defeat them by following the liberal advice to “just ignore them.”

If we don’t stop the far right today, they will stop us from organizing tomorrow–it’s that simple. This isn’t a battle that we chose, but it’s one we have to win.

Let’s also be clear that we can’t rely on the police to protect us from fascists or on the government to deny them permits. It’s up to all of us to defend our communities and our movements from the right.

If we’re successful, Charlottesville could be remembered as a turning point, not only in our fight against the right, but in our ability to organize for our own demands.

The International Socialist Organization is wholly committed to this urgent struggle, and we join with the call that has come from so many organizations and individuals since Charlottesville: for a united fight to confront and defeat fascism.

There will be flash points in the coming weeks, from Boston to Berkeley, but this fight needs to be taken into every city and town, into every community, onto every campus, and into every workplace. We appeal to all our supporters and the whole left to take this stand: Now is the time to unite and fight.

THE MOST horrifying incident from Charlottesville last weekend was, of course, neo-Nazi James Fields’ terror attack, in which the Vanguard America member plowed his car into a contingent of marchers that included members of the International Socialist Organization, Democratic Socialists of America and Industrial Workers of the World, among others.

But the project of fascism is a lot larger than solitary terror strikes. They want to build an organization of disciplined thugs to systematically brutalize and intimidate the oppressed–a program that, as history shows, inevitably involves murder.

In this instance, it was James Fields who was the killer. But the Nazis and far-right “peacekeepers” who came heavily armed to Charlottesville were prepared to inflict violence on people of color, Jews and the left. They are more than willing to kill individuals in order to pave the way for their real aim–mass murder and genocide.

The real face of fascism was apparent throughout the weekend in Charlottesville: Hundreds of torch-wielding men, chanting “Blood and soil!” and assaulting counter-protesters; groups roaming the streets with weapons and shields, looking out especially for people of color like 20-year-old Deandre Harris to brutalize.

exhibited unprecedented organization and tactical savvy. Hundreds of racist activists converged on a park on Friday night, striding through the darkness in groups of five to 20 people. A handful of leaders with headsets and handheld radios gave orders as a pickup truck full of torches pulled up nearby. Within minutes, their numbers had swelled well into the hundreds. They quickly and efficiently formed a lengthy procession and begun marching, torches alight, through the campus of the University of Virginia.

The fascists in Charlottesville were confident. One smug little Nazi named Sean Patrick Nielsen bragged to the Washington Post, “I’m here because our republican values are, number one, standing up for local white identity, our identity is under threat, number two, free market, and number three, killing Jews.”

All of which made Donald Trump’s initial statement condemning violence “on many sides” all the more sickening to millions of people–and a cause for celebration for the neo-Nazi Daily Stormer website.

This is another warning sign of the dangers of the current moment–with a Trump administration infested with far-right racists, from alt-right promoter Steve Bannon to Euro-fascist ally Sebastian Gorka to Confederacy enthusiast Jeff Sessions.

We shouldn’t have any illusions: The toxic combination of a far right that spans the range from open Nazis to people with access to key White House personnel produced the biggest show of force for American fascism in generations in Charlottesville.

OUR SIDE has a powerful potential weapon to use against this growing threat: overwhelming numbers. The events of Charlottesville–not only the terror attack, but the Nazi flags, the torch-wielding march and the thuggish violence–horrified the vast majority of U.S. society.

From Saturday night through Monday, solidarity demonstrations were called in more than 400 cities across the country–an explosion of protest that recalled the days after Trump’s election last November.

Jason Kessler, the Charlottesville resident who initially called the Unite the Right rally, was chased from his own press conference by furious local residents. Statements poured in from across the country condemning white supremacy, domestic terrorism–and Trump’s weak response. The corporate media suddenly stopped referring to Richard Spencer and his pals as “alt-right” and called them the more accurate “white supremacists.”

Dozens of Republicans in Congress, who made their careers out of pandering to racism and reaction, rushed to condemn the Nazis and distance themselves from Trump–who was finally forced on Monday to explicitly condemn white supremacists.

Even then, though, it should be noted that Trump’s response to Charlottesville is to call for more “law and order”–a racist buzzword that means giving police and immigration authorities more unchecked power to detain and brutalize people of color.

Instead of appealing to the government to defend us, we have to build mass protests to defend ourselves and one another. The strategy of relying on small groups of anti-fascists to fight on behalf of the oppressed was shown to be insufficient in Charlottesville by the bigots’ large mobilization.

This is the moment to build united fronts with as many organizations as possible to confront the right–not only left-wing groups, but unions and civil rights organizations, down to every possible club on campuses.

In Portland, Oregon, this type of coalition brought out more than 1,000 people in June to confront hate groups that celebrated the racist murders of Ricky John Best and Taliesin Myrddin Namkai-Meche.

We need more of this kind of organizing in the coming weeks when the far right descends on Boston on August 19, and throughout the school year as fascists like Richard Spencer attempt a provocative tour of campuses. The Movement for Black Lives has called a national day of action for August 19.

On August 27, the far right is planning an all-out mobilization in Berkeley, California, for a “No to a Marxist America” rally, where they will try to repeat their racist rampages of last spring. But anti-fascists have been preparing for weeks to send the message  that we will not retreat in the face of their violence and hate.

AMID THE many condemnations of the far right in Charlottesville, there has been one distinctly false note coming from many political leaders: that these fascists are somehow “un-American.”

Violent racism has deep roots in this country, and terrorism in defense of the right’s twisted ideals is as American as white sheets and a swinging rope.

But fighting back against racist terror is also very much a part of U.S. history. Those who tell us to ignore the racists and they’ll go away are either ignorant of that–or they don’t want us to build movements against the far right because they instinctively sense that our movements won’t stop there.

This is the time to learn the history of previous generations who fought the KKK and the courageous struggle against fascism in Europe. And it’s time to come together in action to give ourselves the courage to confront the forces that want us to stay home.

The threat of the right is growing, but it has to be faced and overcome in order to fight for any of our demands. One organizer in Columbus, Ohio, gave voice to the instinct for solidarity and struggle that has been felt around the country since Charlottesville:

When we started planning the Columbus airport protest [against Trump’s Muslim travel ban] in January, several right-wingers and Islamophobic scum started posting graphic photos of animals and people being run over by cars.

Their aim was clear: to bully and threaten, and make people scared to come out. For several hours late at night, we just kept taking those photos down. Hundreds and hundreds of people showed up anyway to fight the ban. We kept a look out for errant cars, but they didn’t show up. And so we became part of the historic airport actions that beat back the first version of the Muslim ban.